Now that my Stack has grown bigger with the preamp-module, I decided to get some visual presentation of the Sound”. A LED-Bargraph for the RMS power with peak-hold would be nice!

I also planned to build a discrete logarithmic volume switch and found that it’s best to integrate both functions on one module as both need digital control.

First I researched the famous LM3915 IC only to conclude that a pure hardware approach is to limited and inflexible. I thought that a common Atmega-Micropocessor should have more than enough power to implement these functions and maybe some more later on.

The Display-Module had already been designed in autumn last year: An Active Bicolor-Led Display Module of 7 x 40 Points:

I has eight 5×7 matrices of the smallest size of 20mm height (OEM). As it is not possible to route 2 times 40 pins for the rows to external connectors, I needed to mount ten (!) 74HC595 shift registers in SSOP-package on the backside of the PCB. The craziness of this endeavour became clear to me as I needed 2 weeks to get the high-complex layout finished on a 2-layer PCB.

So it was now time to begin my first programming of AVRs. After the 2 Atmega32 and AVR-Progrmamer, that i have ordered, arrived, I build a small development board and wrote my first lines of AVR-Code in C. 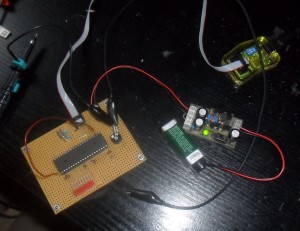 4 weeks later I had acquired some very interesting Insights into AVR-Programming:

Can AVRs be overclocked?!

A good friend of mine called one day and asked me if I could build him a Li-Po Charger. His Girlfriend wanted to go hiking for some time and needed a way to accumulate solar power for her electronic gadgets.

So I designed and build the circuit in just a few days, though I needed about 3 weeks for it as my free time was a little low. 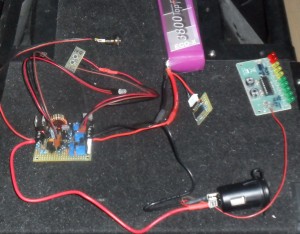 Measuring of voltage and current is done with the help of TL431 Precision References, wired as PID-regulators, and tied to a Switched Buck Regulator for high efficency. I also implemented an electronic switch for shut-off with integrated discharge and under-voltage protection.

The whole assembly found its way into a plastic cycling-bottle, so it can easily be mounted on a bike:

After I have designed my Line Transceiver, i wondered how much gain these kind of circuits can achieve. My aim was to build a discrete preamp that has:

During my experiments i had to learn the hard way what temperature coefficient does mean. Surpassing 20dB of Gain makes the circuit extreme sensitive to any change of the surrounding air temperature. The DC-Operating point of my circuits swinged across the whole range only by blowing some air over it! So at least it was necessary to implement a DC-Feedback path to compensates the temperature drifts. The graphic below show the circuit in simplified form: 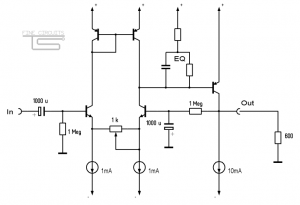 The Preamp is now build for a maximum gain of 86dB, sufficient for tape cassette replay.
The base-voltages at the Inputs lie about 2 Volts below the operating point due to the high input current and the 1 megaohms resistors. This has the advantage that the cascode stage (not shown here) can be tied directly to ground. The pot between the input transistors controll the sensivity of the Input stage. A higher impedance permit higher Input signals without raised distortions!

The passive EQ network can be adopted for all kind of equalizing curves, like reel-to-reel tape machines, vinyl players and others…

The following Image shows my implementations for the MPP-Stack. It uses one of my Switched Micro-Power Supplies to generate the necessary bipolar voltage of +/- 5 Volts. The free space on the right  is the recording amplifier that has not been mounted yet.

In the picture you can see it connected with a disassembled cassette tapedeck. But I also have used it to digitize some Vinyl records…