Life kept me occupied more than a whole year. Can’t believe that it’s so long since I last wrote something….

I decided to finally proceed on building a line receiver and transmitter module for my MPS-Stack. And of course it will be transconductance again!

The receiver must be able to accept differential signals. I could use an OPA660/860 for that, but the transmitter shall have an differential output current and an OPA660 cannot do that. I could use two OPA660s or use an OPA2662, but given it’s rather limited supply voltage range and its limited flexibility I decided to keep my do-it-yourself notion.

I chose to mimic the pinout of the old NJM4558 SIP ICs,

only that mine will have an additional 9th pin for setting the bias current. For layout reasons I put it on the left end to become Pin “0”, so the numbering shifted one to the left. Following the complete circuit: 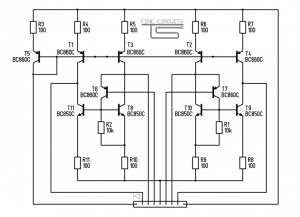 With a nice circuit twist for the input transistors (T6 & T7), that got inspired from John Broskie’s Triadtron I could improve the performance quite some bit:

– Higher input impedance
– Lower bias-to-signal ratio. I could reduce it from 7:1 to 3:1 while keeping the distortions below 0.005 %

The module will be mounted with SMDs. I gonna append pics of the first prototype, hoping that this will not take another 6 months…

… yeah, it took nearly one year: 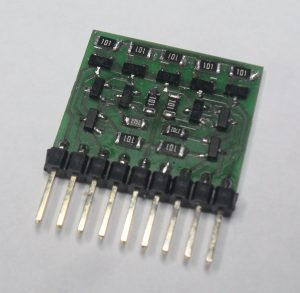 I discovered the main connection between the current ratios and the possibility for the distortion of the input and output stage to cancel each other out! The main variable in the circuit diagram above is the bypass resistor R1 and R2 that defines the bias current for the input stage. If its ratio to the transistor currents is set identical to the bias to signal current the distortion of the second stage fall far below the ones of the first stage. In number:

The total distortion at the output falls below 0.00015%