Surfing the web about the development of Music Mastering, like the Loudness War on Wikipedia, I stumbled over Jim’s Audio page about HDCDs, where a tool was used that analyses the loudness spectrum of audio files.

I just had digitalized some LP recordings using my new Transconductance Preamp when I thought it would be a nice idea to get this Dynamic Plot for the recordings so I can compare it against other albums. Unluckily I had to find out that the original program was not able to handle larger files, so with the help of the original source code from Keith Howard I was able to code my own console-app called “Loudness Scan” and a tool to generate the corresponding emf graphics: 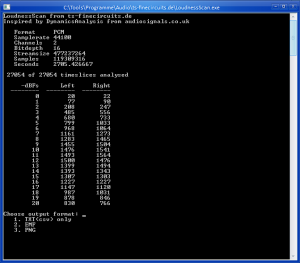 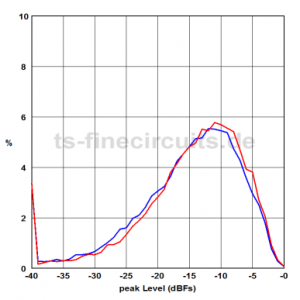 The images show the Volume Spectrum of my digitized recording of “Jethro Tull – Minstrel in the Gallery”. A Spectrum like it should be. The spike at the lower end contain all values below -40dB.

Link to the file:
LoudnessScan.zip

This is the first Version of the tool, only for analysing 2 x 16bit Wave-files. The png-write is not (yet) implemented and there are some bugs with rendering the emf inside emfexplorer… But for now it does what I wanted it to do.