My first tests with the recording amp on my module and also research showed that you need about 0.5 mA peak for signal mixed with another 0.5 mA peak bias for some profound recorded audio.

Measurement at various tape heads showed an inductance of ~125 mH and ~100 Ohm ESR.

Normally this is done using some transformer coils, or Toko coils as they’re named. Problem is that these cannot be found anywhere. There are various Toko coils to be found on the net but up until now I have not found one with the correct values and especially winding ratio to generate the high voltage bias signal.

So I don’t have appropriate coils, but I do have a few samples of a new fancy semiconductor:
Depletion mode FET withstanding 500 Volts LND150. So let’s build a head feeding stage without coils: 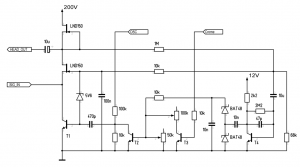 The upper FET acts as current source, the lower one as voltage shifter that fixes the input voltage to about 6 Volts. Of course I’ll feed pure current into it using my Dota-Sims.

T1 controls the sinking current and regulates the output DC voltage to about 100 Volts. It also adds the bias signal.

T4 has  a double task: it sucks out any LF out of the DC-Feedback loop and amplifies and rectifies it to control the bias level. Look it up at the datasheet of uPC1297 “Dolby HX Pro” controller 😉

Simulation looks good so far, hoping to get some first results in at least another year…

Of course I’ll need a 200V supply but that should not pose a problem with my mini switched converters.