After all my experiences with buidling switched ampliufiers, i felt the need to venture into the field of discrete analog circuits. I’ve read a lot about guys on the net that still today, in the time of ICs, build Opamps out of discrete parts.

They say because it sounds better,
it provides more flexibility, and higher bandwidths.
They say that feedback loops should be avoided at all.
Listening via an OpAmp is like watching an orchestra through a key-hole!

I was researching circuits to convert an symmetrical input into a non-symmetrical one avoiding the classic OpAmp circuit all together. Trying to think like one of these audiophile maniacs I thought that a 4-resistor bridge does no “feel” very good: in regard to the floating reference levels, and especially the limited input impedance against ground.

On  the other side are memories of frustating tries to eliminate the ground hum between amp stages, weather for recording sound from the tv-set or wiring multiple amplifiers on partys that draw their power from different sockets.

One way that this can be avoided is by using symmetrical or at least quasi symmetrical signal Transmission.
Another way can be found by force-feeding pure current through the line:

I’ve got the idea that you can have XLR-like quality on standard lines when the receiver does not perceive any noise voltage that can occur along the cable. This can be achieved by transmitting current instead of voltage, as long as the correct terminating impedance is kept maintained, like f.e. 600 Ohms.

This is the result: 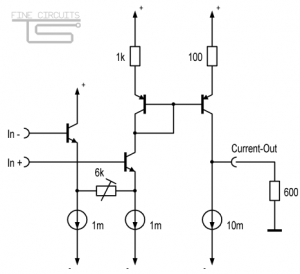 All you’ve got to do is buffering the input into an defined impedance and mirroring the resulting current into the output line. Just have a look on the performance:
• THD: < 0.01 % (can be improved by raising bias current)
• -3dB Bandwidth: 6.5 MHz
• Slew Rate: 200 V ⁄ μs
• Output Impedance: 440 kOhm

For simple unipolar signals there is an even more simple way to build a current driving output; just take a self-biasing transistor with an current source as pullup: 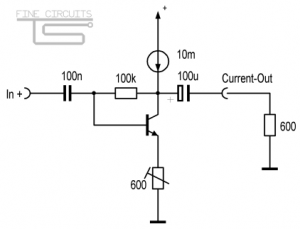 This is a cheap way to upgrade your stereo with an current line-out, won’t cost more than using an OpAmp as output buffer!